"On the 7th day of the 7th lunar month, China celebrates 七夕节. These days, it is celebrated as a Chinese Valentine's Day, with flowers, chocolates, and all. However, the history of the holiday is much more than a simple box of chocolates."


Learn about this beautiful, ancient story which artistically weaves a love story of Star (-crossed) lovers into a happy ending against the silken Milky Way, and how the modern day customs came about from this short video.  The fact that this festival is garnering momentum is revealed by the news excerpt below.

On the 13th of August 2013 the time-honoured Chinese tradition of the Qixi Festival, which fell on Tuesday, the seventh day of the seventh lunar month of the Chinese calendar and widely considered to be the Chinese equivalent of Valentine’s Day, was celebrated by China.  It was the first Qixi Cultural Festival
to be held at the Grand Canal Cultural Square in Beijing!


"As a celebration for Chinese Valentine’s Day, one highlight of the Qixi Cultural Festival is a concert featuring love songs. From "The Moon Represents My Heart" to "The love of the Hawthorn Tree (trailer)", pop stars Zhang Liangying, Hu Xia and Xiong Tianping sing some big numbers about love for the audience. One of the biggest names in the country’s music industry - Jonathan Lee, also performed, winning rapturous applause from the audience."

The Chinese have many love-stories, and are truly romantic people even if these stories are more often about star-crossed lovers like Shakespeare's Romeo and Juliet. However unlike Romeo and Juliet there is often a happy ending - some magical intervention and solution to their dilemma even if it is in the after-life.  This reflects the kind of philosophy they hold about death, reincarnation, and the after-life which is pretty positive and optimistic!

These ancient stories handed down from generations would have to reflect the difficult conditions that young people encountered when it came to love and relationships.  When parental-family power and cultural traditions are so strong most offspring have to subjugate their own desires or preferences to that of the group or clan decision and carry out their duty and do whatever is decided for them, including but not limited to marriage.

This is even worse for women because like all societies (before the Industrial revolution) women were on a sub-footing compared to men socially and did not have much say in their lives. Nowadays things are very different - singles, both men and women, enjoy the kind of freedom and privileges about their life and love-life that older folks could only dream about when they were young.

This year Google designed a very beautiful doodle to commemorate Qixi Festival or Chilseok on the 13-8-2013.  Here it is not just an animated story but also an interactive game on 3 levels where the challenge is to form the bridge for the lovers to cross over, all this against a background of beautiful, traditional music.


Check out how well this player has helped the Lovers!

Here is a lovely take on this very popular song: "The Moon Represents My Heart"

You may also be interested in our book selection for Chinese Valentine's Day: "Love of the Hawthorn Tree" - set during the cultural revolution - and authored by Ai Mi. It is a best-seller in China having sold millions despite the book being free on her blog since 2007. The film version was released by China's premier director Zhang Yimou (Raise the Red Lantern & House of Flying Daggers) in 2010.

Love of the Hawthorn Tree Theme 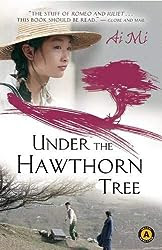 The sound of the boat siren has finally stopped,
I walk along the path leading to the tree.
Under the Hawthorn tree,
the wind gently tousles
the young worker's and blacksmith's hair.
Lovely Hawthorn,
white flowers blossoming on your branches.
Dear Hawthorn,
why are you so﻿ sad?

Wishing you a happy Chinese Valentine this year!